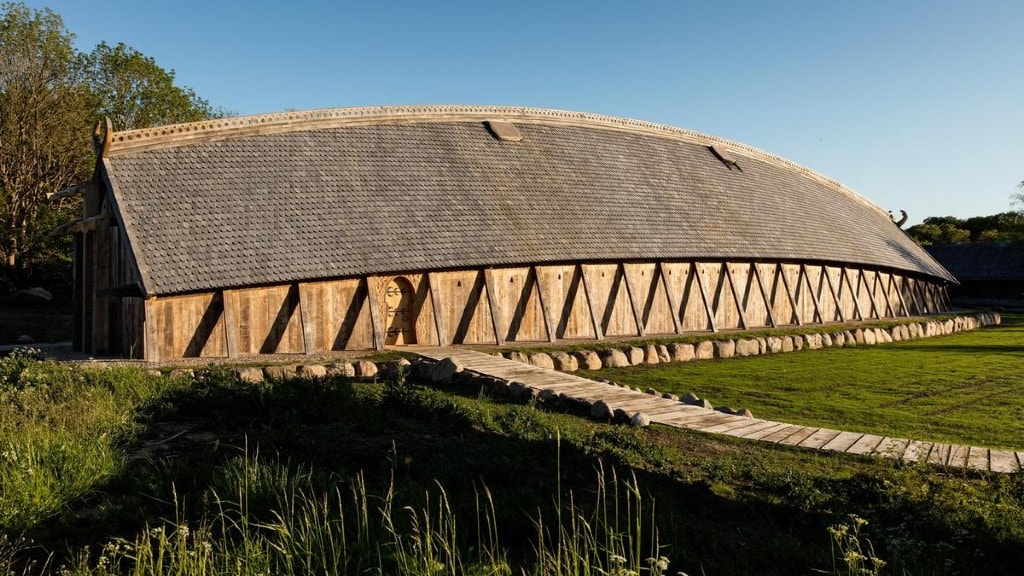 The King's Hall in Land of Legends Lejre

Denmark's largest Royal Hall from the Viking Age is located in Sagnlandet Lejre.

The stories tell that precisely in Lejre the first Danish kings ruled; The Viking Kings Skjoldungerne. And you can't help but be impressed and overwhelmed when you stand in their huge Royal Hall, which is just built in Land of Legends Lejre.

Like an inverted ship, it rests high on one a hills. Here the King sat with his warriors around the open fire in the middle of the hall. And here the legendary hero Beowulf fought against the monster Grendel to defend the king's royal hall.

The Royal Hall is more than 10 meters high and measures 60 meters from end to end. It is built of over 1,000 tonnes of oak and beautifully decorated with figures from Nordic mythology; Odin and Tor, Odin's ravens and wolves, snakes winding and proud eagles. The hall is a fantastic example of Nordic architecture and an impressive craftsmanship - both then and now.

The remains of the original Royal Hall and four smaller halls were excavated approx. three kilometers from Land of Legends Lejre, in the village of Gl. Lejre to prove that this is the king's seat for the earliest Danish kings. In Gl. Lejre you can also experience Lejre Museum, which gives you the history of the beginning of the Kingdom of Denmark through some of Denmark's best preserved finds from the Viking Age. In the area are also the remains of one of Denmark's largest stone ships.