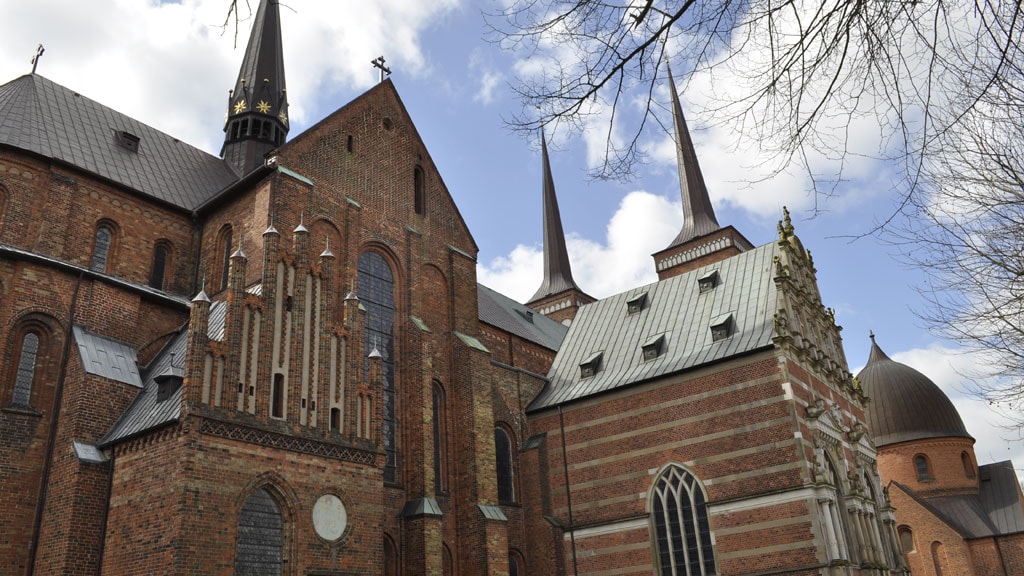 Roskilde Cathedral is inscribed on the UNESCO world heritage list. It is a unique and beautiful medieval cathedral. The Viking kings Harold Bluetooth (d. 985) and his son, Sweyn Forkbeard (d. 1014) conqueror of England is buried here. Almost 40 kings and queens of Denmark are buried here.

For more than 1000 years there have been churches on the spot where the cathedral now stands. The first church on the site was built by Harold Bluetooth who died around 985 and, according to contemporary writings, is “buried in the town of Roskilde, in the church he himself built to the honour of the Holy Trinity”. Harold’s church was made of wood, and later it became the burial site for King Sweyn Forbeard. After having invaded, plundered and conquered England, Sweyn died in 1014. His corpse was brought to Roskilde by an English woman and buried by his family.

In 1026 the church was the scene of a brutal murder when the king of England and Denmark, Canute the great murdered his brother in law. Canute was then forced pay penance to his sister Estrid, the daughter of Sweyn Forkbeard who used the money to build a new church of stone. Her son, Sweyn 2. was crowned as king of Denmark in 1047. Sweyn was born in England. In 1069 he joined forces with the last heir to the Anglo Saxon royal house. They invaded England, recently conquered by William the Conquerer in 1066. Sweyn conquered York, but failed in conquering England. Sweyn 2. and his mother Estrid is buried in Roskilde cathedral.

In the 1170s the present brick church was started. It took 100 years to build and is one of the earliest examples of gothic architecture in Northern Europe. Over the centuries porches and royal burial chapels have been added. More than 40 kings and queens of Denmark are buried inside the church, making Roskilde Cathedral a world record holder in regards to royal church burials. The Cathedral was inscribed on the UNESCO World Heritage List in 1995.

How to get there:

Roskilde cathedral can be reached by train from Copenhagen Central Train Station.  It takes about 30 minutes, and from the Roskilde train station it is a 10 minutes’ walk through the picturesque city centre.

Want to know more about Roskilde Cathedral and what World Heritage actually mean?